There aren’t many traditions that continue for more than 87 years, and even fewer whose popularity and longevity are the direct result of a modest story published for children 65 years ago. I can only think of one: the annual pony penning in Chincoteague, Virginia. Or, as a recent headline in the Baltimore Sun put it, “the magical ‘Misty’ pony swim.”


This year, a crowd of some 40,000 was expected to view the approximately six-minute swim. It's always a mixed group, including lots of children but also many parents and grandparents, for whom being here is a lifelong dream come true. Whether the dream began with reading Marguerite Henry's 1947 Newbery Honor-winning book Misty of Chincoteague, or seeing the 1961 movie inspired by the book, Misty's fans travel as far as they must to stand in what is almost sure to be sweltering heat and clouds of biting insects. Beginning at daybreak, they gather to wait for the chance to watch about 165 small horses cross the 75-yard-wide channel between Chincoteague and the undeveloped Assateague Island, where the ponies live.

The wild pony herd—they’re traditionally called “ponies” on Chincoteague, though technically they’re small horses—is owned by the island’s volunteer fire company, which provides “saltwater cowboys” on horses of their own to round up the wild ponies on Assateague each July and drive them across the channel to Chincoteague. There, after a short rest and many photo ops, the ponies are paraded through the small town of Chincoteague to tree-shaded holding pens, where they’re kept for two days before the youngest animals are auctioned off to the highest bidders. At the end of the festival, with less fanfare, the older ponies quietly swim back to Assateague to live for another year. Money raised by the annual auction supports the fire company and provides funds for new equipment, but it’s more than that. The pony swim brings in so many visitors for the 16-day festival that it fuels the town economy for the other 349 days of the year, and the locals wait for it all year with as much eager anticipation as the tourists. You can read more about the creation of Misty of Chincoteague and the centuries-old roots of pony penning here and here.

I didn’t go to the pony swim this year, but I did go once, with my daughter, who grew up riding ponies, and my husband, who spent those same years mowing pastures and fixing fences. There are many things I love about pony penning week, and some things I don’t. As a horse-crazy girl who never outgrew that passion, and who also grew up near saltwater and sand on the coast of Florida, I can’t help but love a tradition that puts wild beach-dwelling horses at the center of it all. But what I love most about it is that the people come here, year after year, because of a book.

Misty of Chincoteague, never out of print since 1947, was one of a whole library of horse novels I read and reread as a child. And now, as a writer drawn to both fiction and nonfiction stories, I kind of love the fact that Misty is a little bit of both—a fictionalized account of mostly real events, people, and animals, embellished by the author's fertile imagination in a time before sharp distinctions between the genres were so strictly observed. It's a book that may seem a bit dated to today's readers, but it has stood the test of time.

What I don’t love so much about pony penning is that it’s hard on young foals to be separated from their mothers at such an early age, hard on the mares who will likely become pregnant again soon after (if they aren't already), and disruptive to the many small, close-knit wild horse bands that make up the herd. Still, the sale of most of each year’s new foals does keep the overall number to within the 150-horse limit that it has been determined the Virginia portion of Assateague island can support without undue damage to the habitat. It’s a different approach from the way a related herd of wild horses on the Maryland side of Assateague Island is managed, but pony penning is a way of life for the people of Chincoteague, and the saltwater cowboys of the Chincoteague volunteer fire company work hard to take care of the wild ponies they maintain.

(If you want to read about how National Park Service rangers and scientists manage the wild horses of Assateague Island, Maryland—once part of the same herd as their Virginia cousins—check out my book, Wild Horse Scientists, coming from Houghton Mifflin Books for Children this November 6!)

So what do you think? Did you ever read Misty of Chincoteague, and thrill to the irresistible legend of shipwrecked  ponies swimming to safety on a nearby island, to live wild and free? Did you dream of having one of Misty's descendants in your own back yard? If you buy a wild pony and build it a barn in your back yard, does the pony stop being wild? 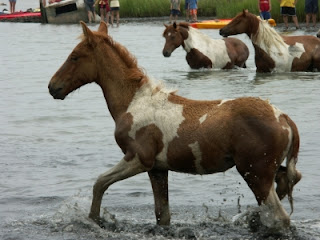