I can't believe it's been a month already since publication day! The best thing about that, I guess, was the day the box arrived from Houghton Mifflin, and there they were, real books! It's so satisfying to see an idea finally become real. But since then, lots of very cool things have happened. Here are a few:

Wild Horse Scientists has received starred reviews from esteemed professional journals Kirkus Reviews, Booklist, and School Library Journal. The Horn Book will also be publishing a lovely review in their next issue, and The National Science Teachers Association named Wild Horse Scientists to their "Outstanding Science Trade Books published in 2012 for Students K-12!"

Also, I did my first two book signings, both of them at a local tack shop (called A Bit More Tack) belonging to the very lovely Abby Little. The books sold out quickly and Abby had to reorder. Yay! Since I think this may have been the first time she's hosted a book signing amid the riding helmets and saddle pads and other horsey items in her shop, no one really knew what to expect. It was great fun meeting people and talking about how the book came to be. As much as I treasure professional kudos in the form of great reviews and "Best Of" lists, hearing from real readers how much they're enjoying the book—a science book, among horse people!—has been really wonderful. And everyone is wowed by the more than 100 color photos in the book. Even though credit for those goes to my talented photographers, I feel as if I practically willed every one of them onto the page! Well, it seemed that way at the time, as deadlines loomed. Here's a pic from the book signing: 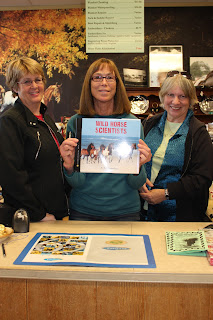 Most of the reader reviews I've gotten so far have been from adults, and I'm delighted that they find the story interesting and even suspenseful in places. I really wanted it to be a book for everyone who loves horses, science, and the natural environment, in whatever order those interests exist! But I'm especially looking forward to hearing from some young readers, too. I'd welcome comments to this space any time!

Another friend passed along a great article from the current (November 12, 2012) issue of High Country News, which calls itself a magazine "for people who care about the West." The cover story is called "Nowhere to Run" (by Dave Philipps), and it's about the gathering crisis of wild horse population control in the American West. Although my book focuses primarily on the wild horses of Assateague Island, Maryland, the quest to find a humane and effective method to limit wild horse numbers and thus ensure their survival actually had its beginning in the West. This article is
an excellent roundup (no pun intended) of the very difficult and contentious issues involved in sorting out the past, present, and future of wild mustangs. Jay Kirkpatrick, whose work to develop and test the wild horse contraceptive PZP is the story at the heart of my book, is quoted in the article, along with other voices on all sides of the issue. And there are some stunning photos, too. The magazine is by subscription only, so I can't link to the article here, but it's well worth looking for if you're interested in the plight of America's mustangs.

Here's a link that will take you to further information and photos about these horses. It's the blog of T.J. Holmes, who is also featured in the High Country News article. Holmes calls herself the "horse paparazzi," since she's been somewhat obsessed, for years, with the mustangs of the BLM's Spring Basin Wild Horse Management Area in southwestern Colorado. She's spent hours observing and photographing the horses in this one dusty corner of America, but that's not all. She's also one of a small army of volunteers—all of them expert observers and advocates of wild mustangs—who have been trained by Jay Kirkpatrick to safely and effectively carry out the labor-intensive darting of wild mares with PZP. Volunteers are ordinary citizens who travel to Kirkpatrick's lab in Billings, Montana for an intensive 3-day PZP training course. Now these volunteers account for about 16 percent of PZP applications among the Western herds—and the effort still falls short of the need.

But slowly, and not always surely, wild horse contraception is becoming accepted as the best available solution to the problem of wild horse overpopulation. For an inside look at the wild horses of the perhaps aptly named Disappointment Valley, check out Holmes' blog. And here's a shot of a couple of mustangs from Colorado's Little Book Cliffs wild horse range. These guys, with their bright pinto coloring, look quite a bit like many of the wild horses of Assateague Island. But controlling their population numbers is a more daunting task than the well-established contraceptive program that keeps the Assateague Island herd in check. Their future is precarious. 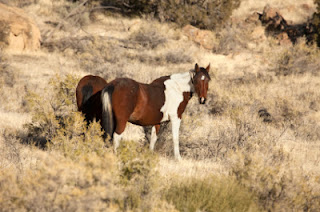