Where did THAT summer go??

I never meant to stay away this long. Really. But I've been busy, working against a deadline to finish my next book, whose subject is multifaceted and much more complex than you might guess. What's it about? Well, here's a hint: 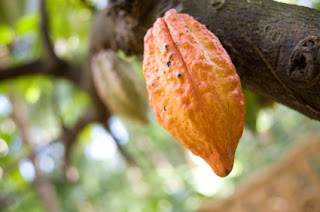 If you guessed that the book's about funny-looking orange footballs stuck onto trees, you'd actually be wrong! It's about chocolate, and this ripening pod hanging on a cacao tree's main branch is the first part of a long process that eventually gives us the "food of the gods" that more of us crave than any other foodstuff, so studies tell us. Making chocolate from this tropical fruit is a long, involved process with an equally long and fascinating history. And it took me a long time to write about it, too, but I did finish the draft (almost) on time. Yay!! Believe me, I found some chocolate, and a little bubbly, to celebrate that day! There's a lot of history in this book, many stories, lots of science, and even some recipes, so it all seems good. Since making a book is a long process, too, Chocolate: Sweet Science and Dark Secrets of the World's Favorite Treat won't actually be out from Houghton Mifflin until spring of 2015, but I hope it'll be worth the wait. I learned so much in researching this book, and I'm sure I also sprouted lots of new gray hairs while trying to figure out how to tell such a big story in a (relatively) few pages. This is kind of what I think I looked like that last week or two, as the deadline approached: 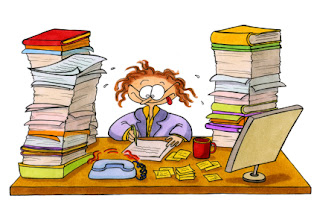 Except my desk was a little messier than that . . .

But now that Chocolate's off to my awesome editor, I've started researching the next book, which is on a topic very near to my heart. Okay, I won't make you guess. It's dogs! But not just dogs. Also proto-dogs, otherwise known as gray wolves. And about how scientists think the two of us, dogs and humans, might have hooked up in the first place, longer ago than anyone ever thought. I love research, so this is going to be fun.

In the meantime, I'm also finally catching up on all the stuff I didn't have time to read during the last few weeks and months, and here are a couple random things I've learned:

1. On Santa Catalina Island, off the coast of southern California, 150 wild bison roam free. They're the descendants of 14 animals brought to the island in 1924 for a Hollywood film shoot. But the movie never got made, and the bison never left the island. With no natural predators, their population had exploded to more than 600 by the 1980s. Sound familiar? Well, 600 bison is a lot for a little island, and eventually biologists were consulted to figure out what to do. Just as with the once-expanding wild horse herd on Assateague Island (described in my book Wild Horse Scientists), the bison population explosion has been brought under control using the immunocontraceptive PZP. After only three years, the herd is down to a sustainable 150. One slight difference that would make a big difference to me if I were the one darting them: Instead of running away when the dart hits them in the butt, the way wild mares do, sometimes the female buffalo will charge! Yikes! You can read about this, and/or listen to the original story on NPR, here.

2. In Ghana, West Africa, live some ants that are sort of farmers. They compete with the human farmers who grow cacao trees (yes, I know, I'm still obsessed with this whole chocolate thing). Anyway, these ants tend a peculiar breed of livestock, which happens to be a mealybug—a small, sap-sucking insect that, according to the article I read in Aeon magazine, look "like woodlice dipped in flour." There are photos, and it's true. The ants protect the mealybugs so they can "milk" the sugary nutritious fluids in their waste (yuk!), which are sugary because the mealybugs drink that cacao sap! The ants also strip the cacao pods to build tents for themselves and their mealybugs, protecting them from predators and pesticides. That's all well and good for the ants and the mealybugs, but very bad for the cacao trees, and the human farmers who grow them, because it leaves the trees vulnerable to several destructive pathogens that can even kill the trees. Worst case scenario? No more chocolate! Okay, this is an over-simplification, but that's it in a nutshell. Nature is just amazing. The article is long, but well worth reading, and you can find it here. (Thanks to my writing friend Rebecca for the link!) But don't be too alarmed, some crackerjack biologists are on the case. Here's hoping they thwart those little herder ants and save chocolate for the next generation! Yeah.
Posted by KayF at 2:22 PM No comments: