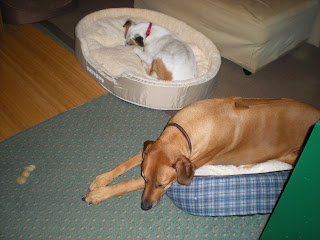 It's a sad fact that for the second time since I started this blog, I find myself writing about the loss of a wonderful dog. Finn and his late, great buddy Asa are featured prominently, well, everywhere in my life. They were my designated office assistants and mascots, their image is my computer screen saver, and photos of them cover many of the walls in our home, along with photos of the horses that have also been such a big part of my life. Asa succumbed to cancer on August 20, 2012 (see blog entry for 10/01/12); not long ago we also lost Finn, to a different type of cancer, leaving, for the moment, only the small white dog you see hogging the larger bed in the photo above. Finn was okay with that; he was that kind of guy. His absence has left a rhodesian ridgeback-sized hole in our lives here. And if you knew Finn, you know that's a pretty big space. We miss him.

But we have a new young ridgeback coming to join our family very soon, and that helps us quite a bit to get through these days where there are too many dog beds around, and too much space on the couch when we sit there in the evenings. Our new girl is coming all the way from Texas, and she arrives on Saturday! Even though we haven't met her yet, we think she's pretty special. She's large (80 pounds), not quite 2 years old, and a pretty unique color for a rhodesian ridgeback these days (though not in the early days of this fairly young breed, which developed in South Africa beginning around the 1920s)—brindle! Her foster mom tells me she's the sweetest thing, and smart, too. She is a rescue, but one with a happy story, in that her original family gave her up to the ridgeback rescue when they realized they just didn't have the time or space that she needed. So she's always been loved, and we're pretty sure we're going to love her too. Her Texas name was Sadie Belle, which may have been fitting for Texas. But we're going to pick up a little bit of her African heritage, and call her Saada, which is an African (Swahili) word for "helper." We're pretty sure she's going to help us a lot, in all kinds of ways. Here's an advance photo of her, still Sadie Belle in her Texas foster home: 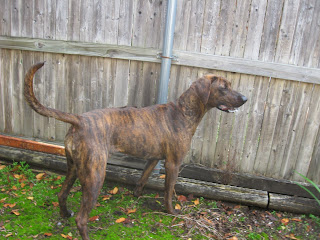 I've been away from here for way too long. Very busy finishing my next book, which, as I mentioned in an earlier post, is all about chocolate! The research has been yummy. I'm finishing revisions and getting together some great photos for the book, which will be out from Houghton Mifflin Harcourt in the spring of 2015.

As soon as it's ready to go, I'm getting to work on the next book, which will be, so fittingly, about dogs. And about humans, and humans and dogs together, evolving. I'm very excited about it. The title is The Dog in the Cave: Coevolution and the Wolves Who Made Us Human. Also from my wonderful publisher, HMH, and due out in 2016. That seems like a very long time from now, but I know I'm going to be working like crazy to meet my deadlines. It's going to be fun, though, and I'll once again have two very special office assistants who should inspire me daily. I'll keep you posted. I'm sure I'll have a lot more to say about dogs, dog breeds, and the wolves from whom all domestic dogs are descended as I get into this book! And just to round out the dog theme, so much on my mind these days, below is an old photo of me and my first dog. Her name was Lady, she was (as you can probably tell) a little dachshund, and we lived in Florida. She was my best buddy then. For a long time, I thought I had no photos of her, and then some old family pix unexpectedly came into my possession. This one brought back a ton of memories. 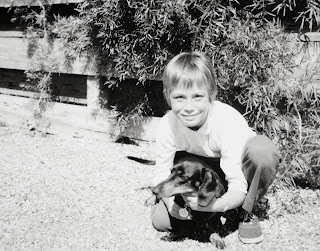